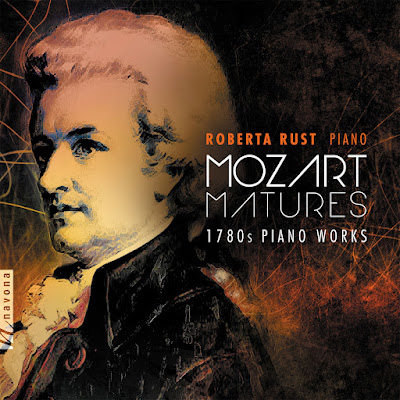 Given that Wolfgang Amadeus Mozart (1756-1791) lived for a pitiful 35 years, it seems strange to discuss his works of maturity. However his sheer precocity and prolific output, beginning at the age of five and numbering over 626 works, one might consider his last ten years as his period of maturity. 1781 was, after all, the year he got booted out from the employment of the Prince-Archbishop of Salzburg. Becoming a liberated man, he was financially independent and free to do as he pleased.

This marvelous recital disc by American pianist Roberta Rust covers the years 1782 to 1789, which also marks Mozart’s most active period as a keyboard composer with 16 concertos, 9 sonatas and numerous shorter pieces. The shorter pieces, including some of Mozart’s most serious compositions, are the main focus of this recital. There is however one sonata, the F major (K.332 from 1783), which illustrates a more flowing and lyrical manner of the ‘style galant’. Rust has a good feel of this elegant music, and performs most persuasively.

The two Fantasies are Mozart’s most famous single movement pieces. Opening the disc, the D minor Fantasy (K.397, 1782) is almost improvisatory in feel, alternating between minor and major keys before closing on a spirited high. The C minor Fantasy (K.575, 1785) sounds surprisingly modern for its time, the first two notes being echoed in Chopin’s First Ballade of 1835. Mozart’s harmonies and progressions are truly astonishing, and so are the abrupt dynamic shifts that make it feel so unsettling.

Mozart is at his most austere in the Adagio in B minor (K.540, 1788), again distinguished by strident discords and apparent bleakness. Dark clouds hang over most of its 10-minute duration, but Mozart affords a ray of sunshine (and smile) at the very end. Just as mysterious is the Rondo in A minor (K.511, 1787), which has an air of haunting about it. Its slow and hypnotic rhythm is probably the inspiration for many a movie score involving ghost houses. Rust’s approach to these works is one of total clarity and tonal coherence, shunning cheap and sensational effects, all without diminishing the music’s impact.

As a bit of levity, the very brief Eine Kleine Gigue (K.574, 1789), a Scarlatti-like binary form miniature is inserted between the Adagio and C minor Fantasy. Between doom and gloom, Mozart’s humour always shines through. Heartily recommended.