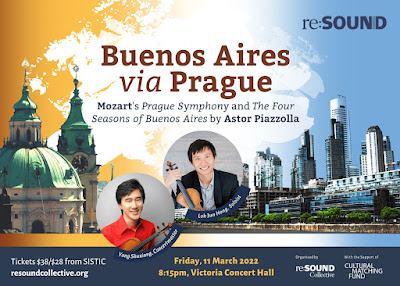 If there were a concert that confirmed the collective prowess of a professional chamber orchestra in Singapore, that would have been this evening’s chalk and cheese programme of Mozart and Piazzolla by re:Sound. In two diametrically different musical idioms, Singapore’s elite chamber ensemble showed that it could not just cope with the music well, but also shine and excel.

Opening the evening was Mozart’s Symphony No.38 in D major (K.504), known as the Prague Symphony because it had its 1787 premiere in the Czech city. Led by concertmaster Yang Shuxiang, the players launched into the long-held opening note with one accord, incisively and without fear. These moments often determine the direction and tenor of the performance, and one was in no doubt it was going to be an exciting one. The elaborate slow introduction and build-up was well handled, and the ensuing Allegro movement proper simply took off. Although this was not a period instrument group, swiftness and lithe textures from the strings gave it the buoyancy and lightness that resembled one. With a clear and homogeneous sound, with all fat trimmed off, lean and mean was the way to go. 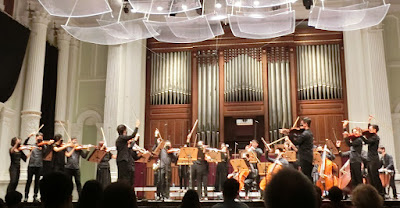 The extended slow movement oozed elegance and fine control. So persuasive it was that one does not even doubt that its second subject could actually be the “Enigma” theme from Elgar’s famous set of variations. This three-movement symphony lacks the customary Minuet and Trio movement, in its place was a Presto finale taken at a searing pace. The ensemble’s togetherness at such an implausibly fast speed was a testament to its capabilities. A chill factor was also provided by the flutes of Cheryl Lim and Rachel Ho which cut to the bony core. To say this was an exhilarating performance would be an understatement. 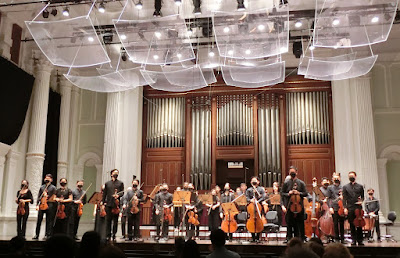 As it turned out, this day (11 March) marked the 101st birthday of Argentine tango composer Astor Piazzolla (1921-1992). The programming of his Cuatro Estaciones Porteñas (Four Seasons of Buenos Aires) was likely no coincidence. The work, modelled after Vivaldi’s Four Seasons, has become a staple of orchestras around the world, thanks to Ukraine-born Leonid Desyatnikov’s arrangement for violin and strings which was recorded and popularised by Gidon Kremer and Kremerata Baltica. It was also the ideal vehicle for young Singaporean violinist Loh Jun Hong’s exuberance and virtuosity. He possesses a gorgeous tone and the free-wheeling spirit to make everything sound as if freshly improvised. 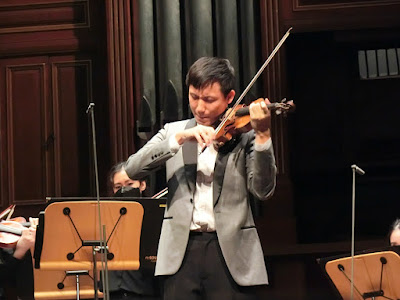 Supported by the 21 string players of re:Sound, the performance was total treat. In Otoño Porteño (Autumn), its unique sound world was established; brash and resonant, with the regular use of sul ponticello (bowing near the bridge) with its raspy metallic timbre, very heady stuff indeed. Principal cellist Lin Juan’s solo were also excellent, a perfect foil for Loh’s showboating. This music is never coy, and all the players gamely brought out its oozing sex appeal. Invierno Porteño (Winter) is the mellowest piece of the four, its melancholic melody bringing out a chill. Desyatnikov’s arrangement is also interesting as short quotes from the original Vivaldi are slyly inserted into the musical fabric, like an echo and distant reminiscence. 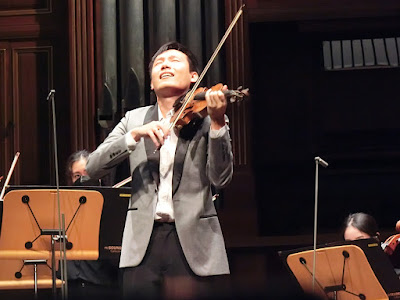 It was back to more high jinx in Primavera Porteña (Spring), with a fugal treatment of its main theme, and the clarity of the playing becomes even more apparent. Loh’s animated moves, with his gravity-defying back-arching maneuvers reminded one of a latter-day Paganini, once rumoured to have some connective tissue disorder that allowed him an envious flexibility that no other possessed. Closing with Verano Porteño (Summer), its infectious rhythms and outrageous glissandi brought down the house. 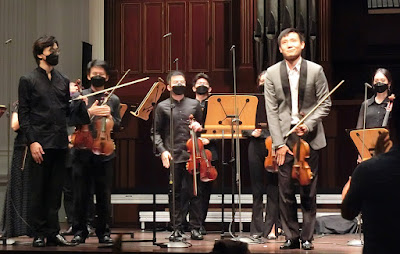 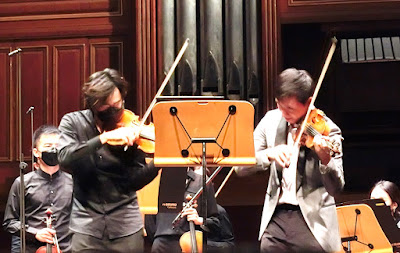 Seldom has there been a more spontaneous standing ovation seen at a chamber concert, and the delicious encore was served up by Loh and leader Yang, the mischievous duo violin arrangemenent of La Cucaracha by that master of music comedy himself, Aleksey Igudesman.