IN MEMORY OF A

It is with much sombreness and sadness that we learn of the passing of Dr Marc Rochester, British music critic, music educationist, concert organist, choirmaster and sometime school bus driver who had been an eminent personality in the classical music worlds of South East Asia over the past four decades. He left this world on 5 May from his home in Scotland, leaving behind beloved wife Magdalene and daughter Prisca. 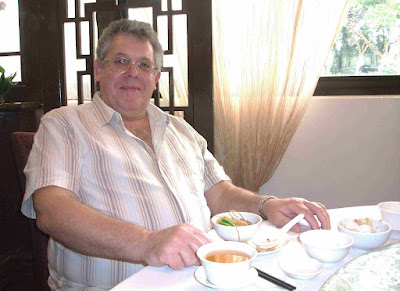 He was a senior lecturer (Contextural Studies) in the Yong Siew Toh Conservatory of Music until his retirement last year. From 2010, he regularly wrote concert reviews for The Straits Times and was the official music annotator for three professional orchestras, the Singapore Symphony, Malaysian Philharmonic and Hong Kong Philharmonic. He was extremely knowledgeable especially in the arcane vistas of music history, and his programme notes a fount of interesting information (and irreverent trivia) besides being refreshingly informal, and most of all, always filled with wicked wit. He always regarded himself as a “professional listener” rather than that crusty and self-important epithet, that of a music critic.

I first saw him in 1999 when he travelled with the newly-formed Malaysian Philharmonic on its debut performances in Singapore, where he performed the pipe organ part of Tchaikovsky’s Manfred Symphony at Victoria Concert Hall. It was several years later on another MPO tour when we actually met at Esplanade Concert Hall, and clicked instantly. He was ever-friendly and regularly regaled me with stories about Asia’s newest hot-shot orchestra, with its fair share of triumphs and misadventures.

After he moved his base from Kuala Lumpur to Singapore, I got him on board the music reviewing team of Life!, The Straits Times’ lifestyle pages. The national daily could certainly do with a diversity of voices and someone of his vast experience, having been a reviewer for Gramophone and the highly-respected but now-defunct International Record Review. His acute observations about performances were invaluable, his free-wheeling way with words always enjoyable to read, not to mention his unforgettable put-downs.

He was known to be an equal opportunity music critic, that is every artist or performing group had an equal right to be criticised or slammed. He had a special relish for that time of season when The Straits Times requested for the “Worst Concert of the Year”, which he duly supplied with a wicked glint in the eye. Artists with pretentions, puffed-up with pompous self-promotion were fair game for his opprobium, with little regard for their stations in the musical world.  He once remarked, “I’ve never given a bad review, but reviewed plenty of bad performances!” The exceptions were music students and young up-and-coming artists, who received nothing less than appropriate plaudits and whole-hearted encouragement.

Outside of music, he was an ever-hospitable host. My family was once invited to a dinner at his East Coast Road home, where he had invited a young Malay guzheng player to enthrall all present with his virtuosity. On more than one occasion, I urged him to write a book about his extremely colourful life and travels (and travails) in classical music, but sadly that opportunity has been lost. However, we still have his wonderfully eventful and erudite blog (Dr Marc's Blog (marcrochester.com)),which is filled with his rants and raves, innumerable gems and nuggets of insights, all imprinted with his irrepressible and inimitable writing style. Long may that stay online as a fitting tribute to one who loved, worshipped and celebrated good music like no other.

Marc, your humour, humanity and hilarious stories will be missed by us all.

Update:
Marc's last blog is no longer available for viewing but some of his earlier essays and articles may be found here:
About | Dr Marc's Blog (wordpress.com)
Posted by Chang Tou Liang at 13:39

Sadly Dr Marc’s blog has been taken off line. Do you know of any way to get it back again, ot to retrieve the contents by any other means ?
Peter

I was wondering about that myself. I suspect that the blog which uses Dr Marc's name as its own domain was possibly paid by subscription, which has since run out after his passing. It's a real pity since it is a treasure trove of interesting knowledge, information and ideas. Fortunately his earlier blogs with Wordpress and Blogspot are still available for perusal. Sadly this marks the end of a legacy.

Marc and I had been friends for over 60 years. We were choirboys in the same church in SE London, shared a passion for the organ, and music in general. He had kindly mentioned me in a few of his 'Dr Marc's Blog' posts.

It was lovely to read your moving comments of my oldest and dearest friend.

I miss him terribly, and it's wonderful to know that he touched the lives and hearts of so many people with his warmth, humour, encyclopaedic knowledge, erudition and sheer humanity.

May he rest in peace, and rise in glory.

A wonderful musician, who inspired many - RIP

Mark Rochester was in my class at primary school and the same cub pack. He sang beautifully and played a multitude if instruments at school. We all looked forward to him bringing something to play in Mrs MacKay's class. At cubs he surprised everyone by winning the trial for racing the 9th Royal Eltham go-cart along Brighton prom in some big jamboree. Somewhere, I have a cine film of that event! I never remember him without a smile on his face; he was the happiest of children.