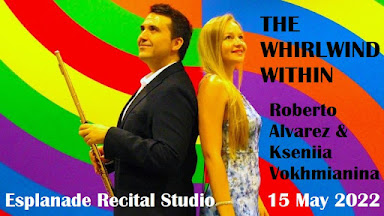 The Whirlwind Within was a recording project by Spanish flautist Roberto Alvarez and Ukrainian pianist Kseniia Vokhmianina, both resident in Singapore, during the fallow months of the Covid pandemic. Both musicians coincidentally arrived in Singapore about 14 years ago, and are presently colleagues at the School of The Arts. Roberto had taken up the assistant principal piccolo desk at the Singapore Symphony while Kseniia came as a teenaged piano student to the Nanyang Academy of Fine Arts. That both have established themselves as vital figures in Singapore musical life speaks volumes of their good work and the welcoming milieu which accepted them as our very own.

This 70-minute-long concert was the launch of their debut CD recording on the artist-led Odradek label and a prelude to their concert tour to Europe in June. Those wary of 20th and 21st century music had absolutely nothing to fear as the programme was 100% tonal, much of it as approachable as late Romantic repertoire, but infused with popular, folk, jazz and dance elements. 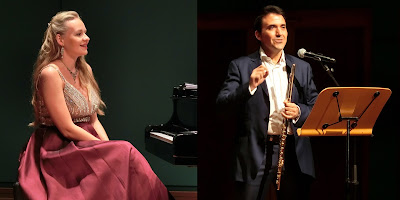 The Sonatina (2007) by Englishman James Rae opened the concert with a bang. The sheer exuberance and syncopations of its rhythmic outer movements (Aquarelle and Fire Dance) contrasted well with the lyrical legato lines of the central Nocturne. This vein of easy accessibility continued into Spaniard Daniel Sanchez Velasco’s Dance Preludes (2020), which claimed multiple references including Beethoven’s Seventh Symphony in the opening bars of the Allegro. Elsewhere, one might also sense the spirits of Faure, Granados and Rachmaninov looming nearby.

There was initially a fear that the mostly Romantic piano writing might overwhelm the flute but both instrumentalists soon found a common ground which continued through the whole concert. Roberto’s rich and mellifluous tone, allied with perfect intonation were a constant, matched by Kseniia’s always alert responses and sensitive piano accompaniment. Gonzalo Casielles Camblor (1931-2020) was Roberto’s longtime music teacher in Asturias, and his El Vals De La Fortuna (2014) or Fortune Waltz was based on the simple five notes (D#-E-B-C-A) from the numbers of a winning lottery ticket. This was a charming little piece with an earworm of a melody not too distant from the once ubiquitous Tarrega Gran Vals (that darned Nokia ringtone!).

The four short movements of Elisenda Fabregas Flute Sonata No.1 (1995) formed the most substantial work on the programme. Relative to the others, it had the most dissonance while also displaying the greatest range of moods and emotions, from sadness and grief to anger and fury. Was it just me, or did anyone else think that the long opening flute trill reminded one of the beginning of Lalo Schifrin’s Mission Impossible Theme? Through its 15-minute course, the music ran a gamut of unease and agitation, as if borne of a sublimated inner rage and strife.  If there were a work that is accurately summed up by the album’s title The Whirlwind Within, this would pretty much be it. 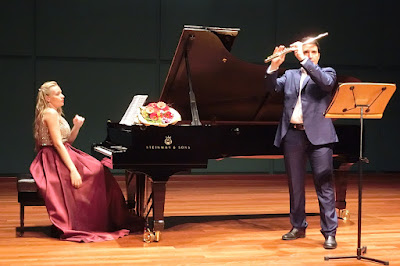 The concert proper closed as passionately as it began with three pieces by the Argentine Pablo Aguirre. La Fuga (The Escape, 1997) had that heady Astor Piazzolla feel with fast tango rhythms, contrasted with the nostalgic milonga-like melody of Distancias (Distant, 2002), a classic and beautiful slow movement. In Pasion Ensordecedora (Deafening Passion, 1991), the extroverted music veered into exultant Gershwin and Bolling territory before closing on a spirited high. 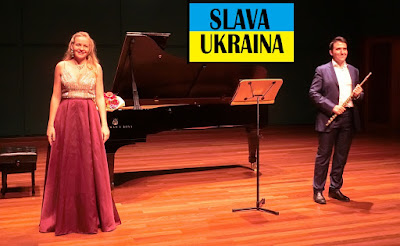 The sole encore was dedicated to the courageous people of Ukraine, a heartfelt rendering of Melody by Myroslav Skoryk (1938-2020). It had a plaintive quality with a motif resembling the one from Charlie Chaplin’s Limelight. With the recent liberation of Kseniia’s hometown of Kharkiv from the Russians, there was a sense of satisfaction and relief to be had all around. The audience was just as enthused, resulting in a long queue to purchase the CD and get the virtuosos’ autographs. 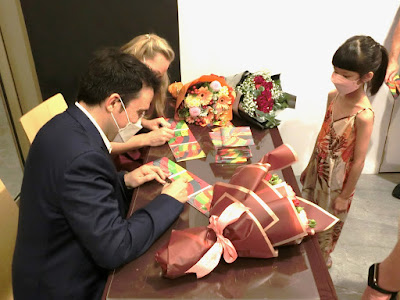 This concert may be revisited in this performance at Odradek's studios (Italy) by Roberto and Kseniia during their recent tour of Europe in June 2022:
Odradek Records - The Whirlwind Within - YouTube
Posted by Chang Tou Liang at 12:11