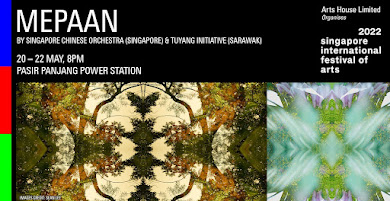 This review was published by The Straits Times on 25 May 2022 with the title "Multidisciplinary show explores cultural traditions".

Imagine a people who live today as they lived before the dawn of history, and coming face-to-face with the 21st century. Does a civilisation of shifting cultivators and headhunters for millennia embrace modernism and change, or stick to the old ways of the forefathers? These questions were posed in Mepaan, the grand opener of this year’s Singapore International Festival of Arts (SIFA). 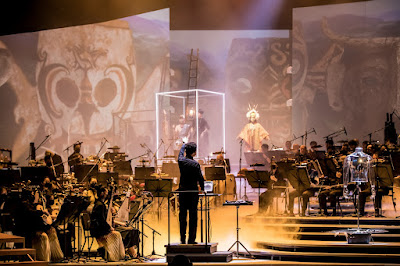 Mepaan comes from the indigenous Kayan language from the island of Kalimantan (Borneo), meaning “always”. In this multi-discipline and multi-cultural show directed by Natalie Hennedige, the answers were neither simple nor direct. The collaboration between the Singapore Chinese Orchestra (conducted by Yeh Tsung) and Tuyang Initiative from Miri, Sarawak (representing the Kayan and Kenyah peoples, helmed by Juvita Tatan Wan) could have heavily weighted in favour of the former. In reality, the three-person team of the latter more than held it own despite overwhelming odds. 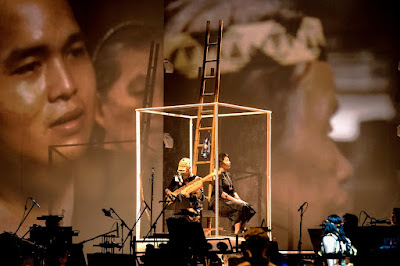 Within the cavernous space that is the repurposed Pasir Panjang Power Station, Wong’s Chee Wai set design cleverly placed the orchestra on terraces, leaving space for a strategically-placed ceremonial headdress and a lit-up booth with the traditional sape (4-stringed boat-shaped lute) at the rear. The two fixtures were linked by ramps running on both sides around the orchestra.

Original and eclectic was the music, including three world premieres, opening with Eric Watson’s rousing Island Sunrise. The composers had worked with the Sarawakians to involve their folksongs and dance rhythms, all seamlessly stitched into the overall fabric. For example, Koh Cheng Jin’s tender Song Of The Night Wind had incorporated two Kenyah love songs Ti Ruti Lun (Come And Sleep) and Sayang Dau Kenai Tawai (My Love For You Cannot Be Spoken). Other works by Kong Zhixuan and Tang Jianping helped fill up the 75-minute-long programme. 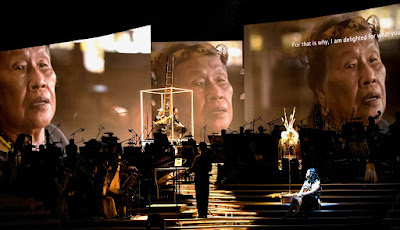 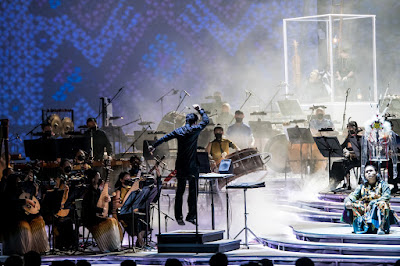 Chinese traditional instruments sounded particularly idiomatic, especially dizis and high winds which approximated birdsong and evoked mystery. Pipas and ruans were placed near the front, their timbres being related to the plucked sape. Chinese percussion provided the beats of pomp and pageantry besides mimicking throbbing rainfall. 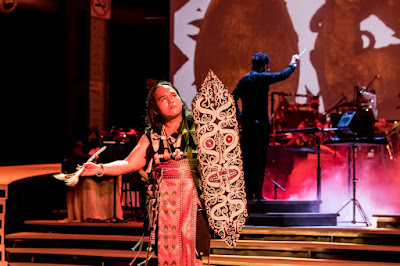 Stealing the show were Tuyang’s Mathew Ngau Jau and Adrian Jo Milang, standing out with their raucous Kenyah songs, punctuated with occasional shouts. The 70-year old Jau’s showcase of sape playing was sadly too brief compared with the 20-something Milang’s pugilistic dance moves. Both represented extreme ends of the generation divide, the frail shamanist alderman standing head-to-head with the youthful sword-wielding warrior. 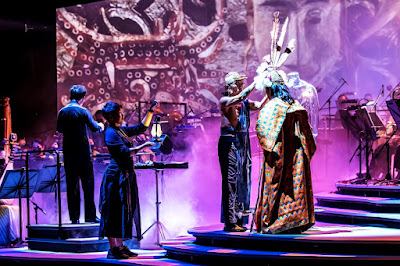 The climax saw the ceremonial passing of the headdress from Jau to Milang, accompanied by Wang Chenwei’s March To Eternity, the symbolism of which would not be lost to the appreciative audience. Will age-old traditions of Sarawak survive the test of time? The answer should only be mepaan, or always. 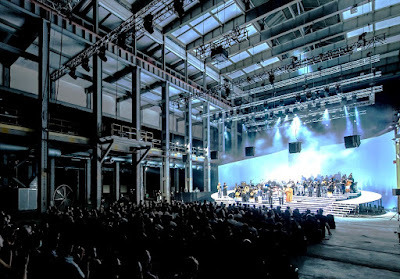 Photographs by Debbie Y. (unless otherwise stated), by courtesy of The Arts House Ltd.
Posted by Chang Tou Liang at 08:00