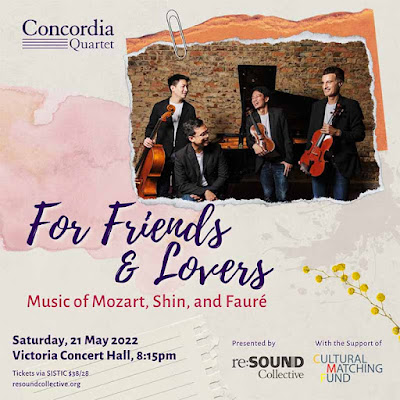 FOR FRIENDS AND LOVERS

The Concordia chamber group, part of re:Sound Collective, has returned but in the form of a piano quartet. Of the original string quartet, second violinist Kim Kyu Ri had resumed her Masters studies overseas, while cellist Theophilus Tan retired. First violinist Edward Tan and violist Mathias Oestringer were joined by new cellist Lin Juan and pianist Jonathan Shin to form the Concordia Piano Quartet. This group’s first concert together was nothing less than a musical triumph. 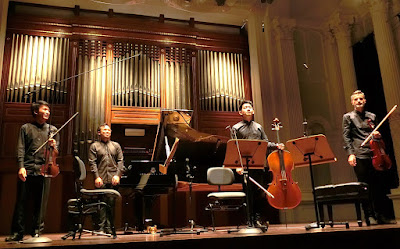 Pandemic disruptions had done little to dent the players’ abilities and yearning to put on a good show. The concert opened with Mozart’s Piano Quartet No.1 in G minor (K.478), the first important work written for this medium, essentially a string trio augmented by a piano. The unison of strings and piano at its outset delivered the music’s sturm und drang (storm and stress) without apology, and the alternating between minor and major modes kept the narrative interesting. Shin’s pianism was crisp and tidy, and with the string players formed a cohesive unit. The central slow movement was a model of lyrical grace, contrasted with the chirpy Rondo finale, filled with the same light-heartedness of the finale from Piano Concerto No.17 (K.453), also in the same key. This was a reading of true joie de vivre. 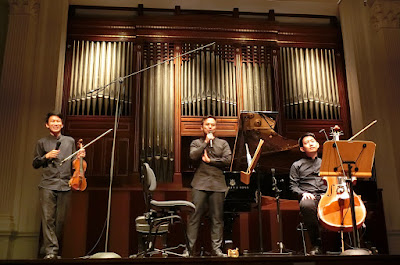 Prolific composer Jonathan Shin’s Four Pictures of Mid-Winter Boston for piano trio was composed in 2017 while snowbound in his New England apartment. Its four movements used simple themes, occasionally modal in nature and sometimes resembling impressionist hues of Debussy and Co. While the opening movement’s piano introduction and string harmonics evoked mystery, the scherzo-like second movement was a playful snow fight between friends, the swift tempo later upped into the little storm of piano flurries in the brief third movement. Edward Tan’s violin’s dominated the final movement, recalling Vaughan Williams’ The Lark Ascending with its pentatonic melody before unleashing a series of Paganinian arpeggios. With short piano chords and a whisper from the cello, the contemplative dream was over. 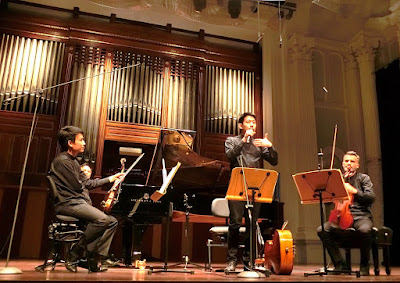 The concert concluded with Fauré’s Piano Quartet No.1 in C minor (Op.15), the Frenchman’s early masterpiece now considered one of the great piano quartets alongside those of Schumann and Brahms. The opening with unison strings echoed that of the earlier Mozart quartet, filled with passion and fervour. The tact taken by the foursome was more gentle, less hectic than those heard in recordings, but its escalation to full steam sounded all the more thrilling. That the ensuing Scherzo seemed lots of fun, with string pizzicatos accompanied by piano arabesques, led to premature applause. This was a sign that the IAB (inappropriate applause brigade) is back in force, which is no bad thing, since concerts desperately need audiences including newbies alongside concert hall veterans.

The slow movement was what Lin Juan described as the angst and pain Fauré had experienced in while falling in and out of love. Its opening voice was provided by his cello, and the movement stood out with its austerity of harmonic language, more often associated with his later and rarefied chamber works. This was beautifully crafted before the energised finale’s romp which reprised the opening movement’s passion. 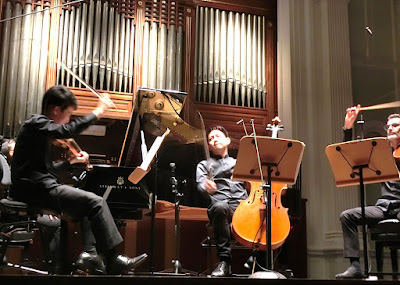 Twenty years ago, excellent performances as witnessed this evening could only come from full-time musicians of the Singapore Symphony Orchestra. That non-SSO musicians could now achieve standards that equalled or surpassed those concerts of the past speaks well of how our music scene has progressed over the years. 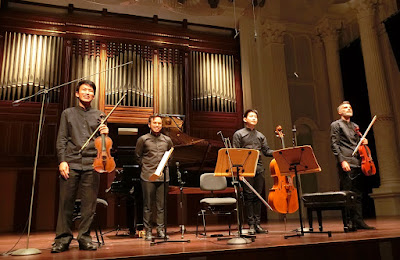