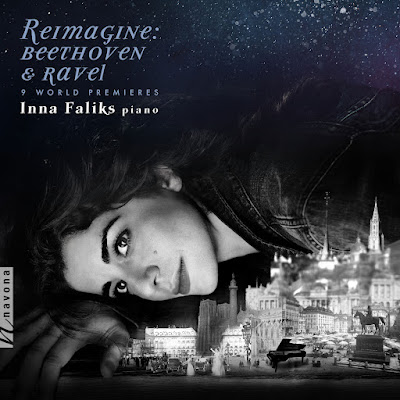 It is curious to find Beethoven in 1825 crafting miniatures for the piano, so soon after his masterpieces Missa Solemnis (Op.123) and Ninth Symphony (Op.125), and before his late great string quartets (Op.127, 130 to 135). If truth be told, his Six Bagatelles (Op.126), which appear like shavings from a master’s work bench, are of a pithy and autumnal quality not unlike the shorter movements from his late piano sonatas (Op.101, 109 and 110). These are the foundation of Ukraine-born American pianist Inna Faliks’ recital album, where she invites six of her UCLA colleagues to compose responses to each of the Bagatelles.

Each new work precedes the original in the recordings. These are interesting by imaginatively transforming melodies, harmonies and rhythms, adding new asides and offering insights, while retaining some form and spirit of the originals. In Peter Golub’s Bagatelle, the original (No.1) is immediately recognisable before whimsically going off on a tangent. Tamir Hendelman’s etude-like Bagatelle uses a recurrent 4-note motif of the original (No.2), transforms and toys with it like a spinning top. 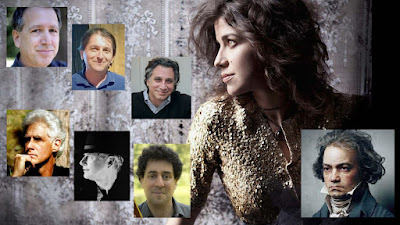 Richard Danielpour is arguably the most recognisable name among the six composers. His Childhood Nightmare begins innocently enough, with the Cantabile e grazioso description of the original (No.3) working itself into something darker and more sinister. The insistent earworm that is Beethoven’s Bagatelle No.4 is worked to perfection in Ian Krouse’s Etude 2A – Ad Fugam on a Non-Octave-Replicating Mode, the title of which is almost self-explanatory. Mark Carlson’s Sweet Nothings is a bluesy musing on the genteel original (No.5), a cantabile in stark contrast with the funhouse distorting mirrors of David Lefkowitz’s Bagatelle (after No.6), which brings the cycle to a scintillating close.

Another semi-recital takes place with three works, also commissioned by Faliks, inspired by Ravel’s masterpiece Gaspard de la nuit. Listeners would already be familiar with the triptych (not included on the disc) and might recognise the responses taken in the new creations even if nothing from the original is quoted. Responding to Ondine, Paolo Prestini’s Variations on a Spell comprises two movements. Water Sprite relives the fluid realm without obvious Lisztian influences, while Bell Tolls – Golden Bees, essentially a funeral march, already looks ahead to the bleakness of Le Gibet.

Timo Andres’ Old Ground, at over 15 minutes, is the longest and most minimalistic piece in the collection. A tolling ostinato rhythm pervades its entirety, casting a hypnotic spell but without the fear and dread of the original. The iconic first three notes of Scarbo are alluded to in Billy Childs’ Pursuit, a coruscating number that evokes genuine edginess, described by the composer like “a black man is being pursued by a slave catcher, KKK lynch mob or modern day police”. Inna Faliks is a brilliant pianist whose instinctual approach to music, makes these new works relevant, and just as importantly, come to live.