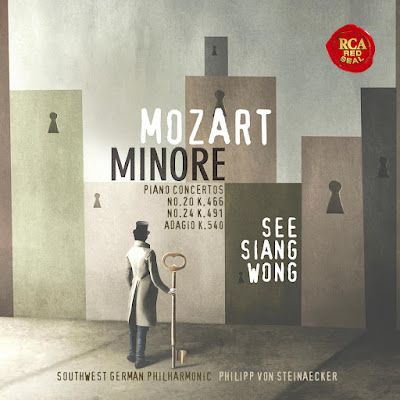 Works in the minor key were in the minority during the classical era. Consider the fact that only two of Mozart’s 41 symphonies, Nos.25 and 40, were in the minor key (G minor). The same applied to his 18 piano sonatas. Just two, K.310 and 457, were cast in A minor and C minor respectively. Thus it makes perfectly logical sense to couple the two Mozart piano concertos (out of 27) in the minor key within the same album, as the Netherlands-born Chinese pianist See Siang Wong has done.

When one encounters the term Minore, sturm und drang (storm and stress) come to mind. Minor keys are associated with passion, tension, drama and tragedy as opposed to the majestic and regal, happier and light-hearted major keys. D minor was the key of Mozart’s opera seria Don Giovanni and the Requiem Mass, which places his Piano Concerto No.20 (K.466) in very good company. Considered to be his greatest piano concerto, its tutti opening bristles with dramatic tension, strife and tumult.

In a similar vein, Mozart’s Piano Concerto No.24 (K.491) cast in C minor channels struggle, conflict and ultimately tragedy. One is reminded of Mozart’s morose Fantasie (K.475) and the Great Mass (K.427), both in C minor. And what about Mozart’s influence on Beethoven’s great C minor works, namely his Pathetique Sonata, Third Piano Concerto and Fifth Symphony?

Against the rigorous yet fine orchestral backing provided by the Southwest German Philharmonic (based in Konstanz, on Lake Constance), Wong applies the most felicitous of touches in music that is paradoxically both fiery and tender. Besides the totally idiomatic performances, the value of these recordings come in the cadenzas for the first movements. In Piano Concerto No.20, he performs the rarely-heard cadenza by Mozart’s pupil and boarder Johann Nepomuk Hummel, a refreshing change from the usual Beethoven. It is even more virtuosic than Beethoven’s bread and butter and yet has many sensitive moments.

In Piano Concerto No.24, he opts for the cadenza by Philipp Karl Hoffmann, a Mainz-born pianist who was a contemporary of Beethoven. This is much longer than expected and totally in keeping with the spirit of sturm und drang. Just as interesting are the ear-catching elaborations and ornamentations applied to the aria-like slow movements. Wong provides his own for K.466, while Hoffmann’s for K.491 all make for very interesting listening.

As an encore, Wong offers what is Mozart’s bleakest and most modern sounding solo work, his Adagio in B minor (K.540), in a most eloquent reading. He knows the true meaning of minore and is unafraid to wear this pathos heart on sleeve.