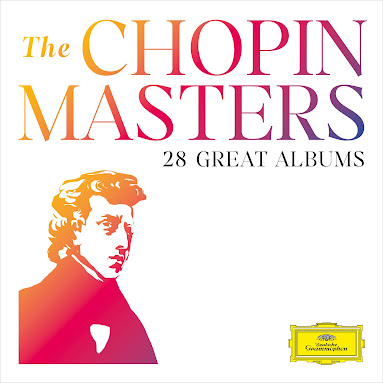 In October 2021 when the Chopin International Piano Competition was taking place in Warsaw, I was sufficiently moved by evenings of live-streamed performances to purchase two items of Chopiniana. The first was Alan Walker’s excellent biography of Frederic Chopin and the other was this boxed-set on the German yellow label. It seemed a crazy idea because many of its contents already exist in my library, such that duplication and triplication seemed inevitable. Yet I persisted to part with my cash. Why?

First, a description of this box-set. Twenty-eight discs presented in original jackets representing 28 pianists. Arranged in alphabetical order, CD 1 is Geza Anda while CD 28 is Krystian Zimerman, although Fou Ts'ong and Dang Thai Son are positioned as if their surnames were spelt with T and S respectively. Not all the 1st prize-winners of the Chopin competition, especially its early years, are among them. Recordings date from 1952 (Julian von Karoly in mono sound) to 2015 (Seong-Jin Cho “live” in competition). While the selections do not profess completeness, all the major works (including both piano concertos) are there with several worthy duplications. Many of the discs keep to their original LP content, thus have short playing times, but there are notable exceptions.

Newcomers to Chopin recordings have much to discover and enjoy. Nobody should be without hearing Martha Argerich in the 26 Preludes and Second Sonata, Maurizio Pollini traversing the 24 Etudes, or Krystian Zimerman’s view of the four Ballades. Auspicious debut discs include those by Vladimir Ashkenazy in Piano Concerto No.2 and a short recital (licensed from Polskie Nagrania, following his second placing in the 1955 competition), Adam Harasiewicz (1955 winner) Ivo Pogorelich (famous “loser” of 1980), Dang Thai Son (1980’s actual winner), Stanislav Bunin (1985), Li Yundi (2000) and Seong-Jin Cho (2015 winner), all captured at their youthful best. 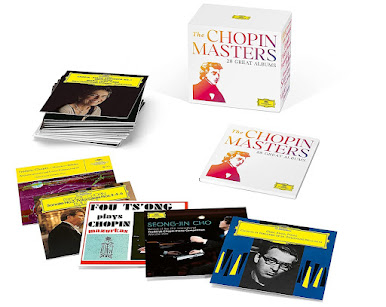 DG “house” pianists over the years like Stefan Askenase, Daniel Barenboim, Lazar Berman, Christoph Eschenbach, Emil Gilels, Arturo Benedetti Michelangeli, Mikhail Pletnev and Tamas Vasary get their playing time, but does anybody remember the late Brazilian maverick Roberto Szidon? His 1976 recording of the Scherzos and Impromptus, tumultuous yet tender, deserve relistening. For that matter, Shura Cherkassky’s inimitable view of seven Polonaises from 1968 is severely underrated. A 1991 take on Piano Concerto No.1 by Maria Joao Pires with the Royal Philharmonic and Andre Previn, a masterly reading, receives its first-ever release, alongside a selection of fabled Nocturne performances.

For the cost of a gourmet meal for two, is this sufficient reason for many hours of self-indulgence?