ONES TO WATCH: VERONA QUARTET / Review 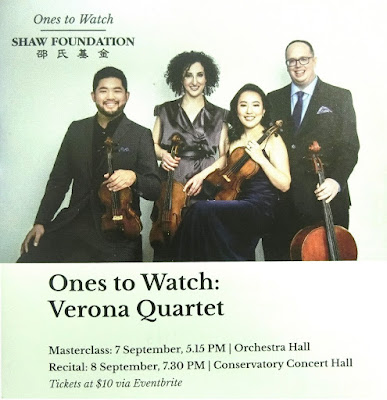 This review was published by The Straits Times on 14 September 2022 with the title "Verona Quartet played with pinpoint accuracy".

Lovers of chamber music are blessed by the wealth of international string quartets that have performed and conducted residencies at the Conservatory. One can rattle off their names: Takacs, Hagen, Juilliard, Endellion, Shanghai and Jerusalem Quartets. Add the Ohio-based Verona Quartet, quartet-in-residence of Oberlin Conservatory, to that illustrious list.

Formed in 2013, the foursome praised for interpretation of contemporary music has a Singaporean, Jonathan Ong, as its first violinist. The other members, second violinist Dorothy Ro (Korean-Canadian), violist Abigail Rojansky (American) and cellist Jonathan Dormand (British), make it one of the most cosmopolitan chamber groups of today. 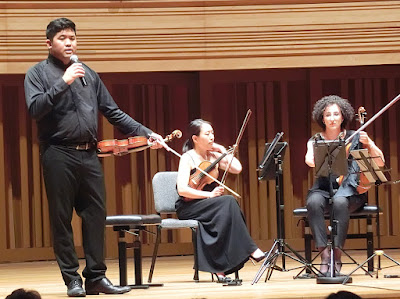 Verona Quartet’s recital, presented by the Conservatory and Shaw Foundation’s Ones To Watch Series, was a showcase of versatility and virtuosity. The most familiar work on the programme, Beethoven’s String Quartet in F major (Op.18 No.1), began the concert. Its unison opening served as a barometer of the foursome’s togetherness, and they did not disappoint. Tautness of ensemble, pin-point accuracy, and a warm sonority all served to make the performance a pleasure. 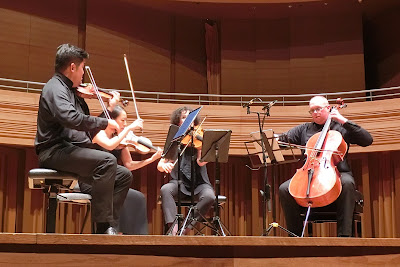 As first violinist, Ong had many of the plum lines and virtuoso turns, and was matched by the other Jonathan’s cello plaints. This was most apparent in the slow second movement in D minor, which sang with the intensity of a sad aria. The rest of the work had a lightness and buoyancy, delivered with the keenest of spirits. 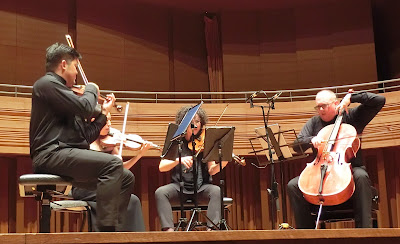 A simple motif of four notes was put through the proverbial wringer, subject to short but wildly disparate variations for which the term metamorphoses was used. Its seventeen linked sections sprung many surprises, including a faux-sentimental waltz, schmaltzy interludes, surprise cadences, all conducted with tongue lodged firmly-in-cheek. Displaying a jaw-dropping degree of adroitness, there was not a dull moment to be had.

Not often heard is Dvorak’s sprawling String Quartet No.13 in G major (Op.106), with four movements which play for almost 40 minutes. Composed after his famous American sojourn (where he created his New World Symphony and American Quartet), the music returned to his Bohemian roots, with the creative use of folk melodies and rhythms. 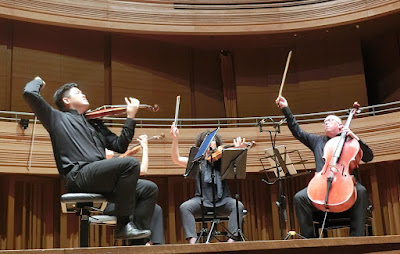 While the opening movement had lighter serenade-like moments, the slow movement breathed with the sighing quality of a lament or Slavic dumka. Memories of his famous Largo (from the New World Symphony) were relived in minutes which expressed longing and regret. The lively skipping Scherzo and the finale’s rustic energy, with a reprise of the first movement motifs, completed a masterly showing.

With all that seriousness behind them, the Verona Quartet offered as an encore Duke Ellington’s Cotton Club Stomp, in all its toe-tapping and foot-stamping gaiety. 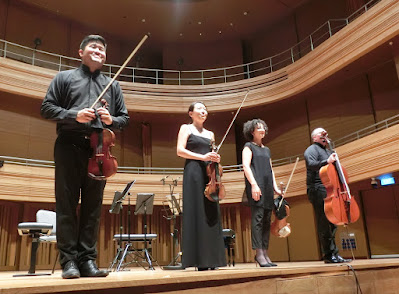 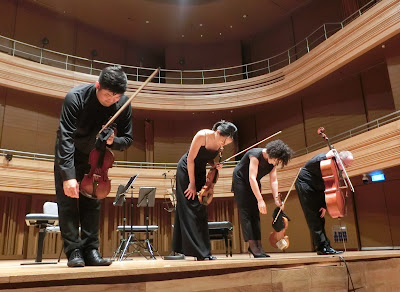