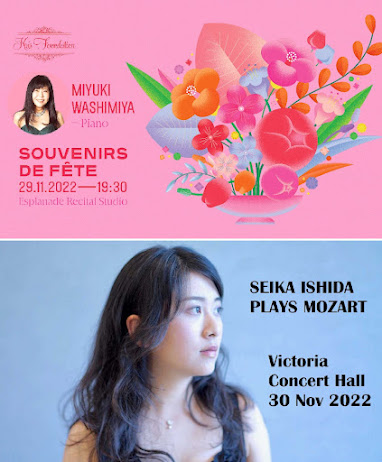 This review was published in The Straits Times on 6 December 2022 with the title "Japanese pianists Miyuki Washimiya and Seika Ishida in fine form."

In an interview, internationally renowned Japanese pianist Noriko Ogawa once gave reasons why there were so many women pianists in Japan. Japanese society dictated that men went into stable and profitable professions like medicine, law, engineering and civil service, while women were encouraged to pursue music and fine arts. She also suggested that should the women not make their careers, marriage was still an option. 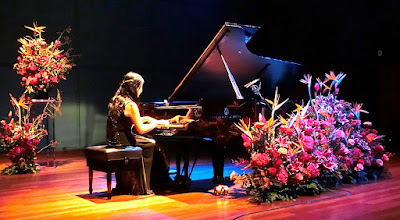 Two very fine lady Japanese pianists were heard on consecutive evenings last week. Keyboard veteran Miyuki Washimiya has regularly appeared here in concerts presented by Kris Foundation, both as soloist and in collaboration with young local musicians. The Paris-trained pianist opened her recital with Mozart’s Sonata in F major (K.280), displaying crispness of articulation and a fluid technique to bring out the music’s lyricism.

The major work was Francis Poulenc’s Les Soirees de Nazelles (The Evenings Of Nazelles), rarely played because of virtuosic demands and myriad intricacies in moods and dynamics. Its eight variations, each with fanciful French titles, were vignettes of close personal friends. Quirky, humourous but ultimately congenial, these found a sympathetic interpreter in Washimiya’s resolute yet sensitive fingers. 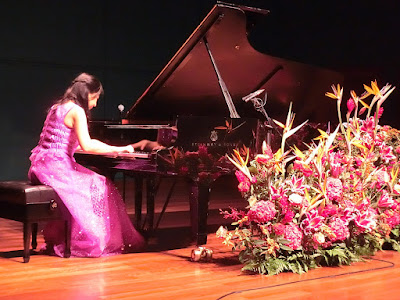 From the younger generation is Seika Ishida, who performed Mozart’s Piano Concerto No.20 in D minor (K.466) with the Singapore Symphony Orchestra under former Principal Guest Conductor Andrew Litton. This was a performance that had everything; the sturm und drang (storm and stress) of outer movements salved by the central Romanza’s tenderness and beauty. Even this had its fair share of upheaval, with tension at its heart finely balanced on a knife-edge.

SSO’s was an ever-discreet partner to Ishida’s every line and phrase, allowing her freedom to flex every muscle and fibre of musicality. Cadenzas were delivered with big-boned sonorities, and if one felt the first two movements a tad restrained, no apologies were made going for broke in the finale, turning urgency into joie de vivre. Her encore was also special, a Chopin-influenced little gem that is Russian composer Anatol Liadov’s Prelude in D flat major (Op.57 No.1).

Equally splendid was the rest of the programme, beginning with short-lived American composer Charles Griffes’s Poem, featuring SSO principal flautist Jin Ta as soloist. Tired of hearing Debussy’s Prelude To The Afternoon Of The Faun? This was the perfect antidote, with an even more fleshed-out solo part. Its dreamy languor backed with lush orchestral colour, and solos from French horn, trumpet and viola, made this an ideal overture.

Closing the memorable evening was Tchaikovsky’s Suite No.3 in G major, a rarity compared with his symphonies. Although light-weight in character, its four movements had a balletic feel which made it impossible to dislike. Strings were in fine form for the opening Elegie and melancholic Waltz, while chirpy woodwinds simply ruled in the whimsical Scherzo.

Most substantial was the finale’s Theme and Variations, eventful as it was inventive. SSO former concertmaster Igor Yuzefovich had a plum solo, worthy of the best minutes in Swan Lake, delivered with stunning aplomb. Concluding with a most rousing of polonaises (the Polish dance of nobility), both conductor Litton and the orchestra had the audience roaring for more. 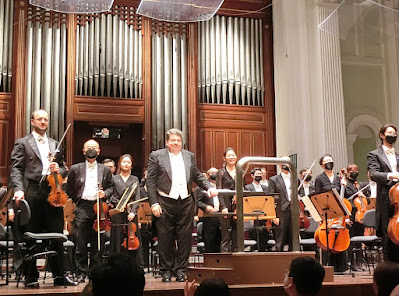