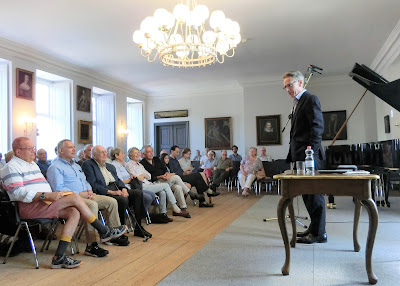 In a festival for pianophiles by pianophiles, Husum has offered an interesting variety of piano-themed talks for its weekend matinees. Jonathan Summers is the curator of the British Library’s classical music sound archive, and his hour-long lecture was a treasure-trove of rare recordings of little-known works by historical pianists of repute. There are no Horowitz or Rubinstein recordings (considered common garden by Husum standards) but gems by the likes of Guiomar Novaes, José Vianna da Motta, Bernhard Stevenhagen, Victor Staub, Walter Rehberg, Mark Hambourg, Michael von Zadora, names so rare that only Peter Froundjian would recognise. Whole tracks were played, and one is astonished by the distinctive sound and colour heard on mostly 78 rpm discs. 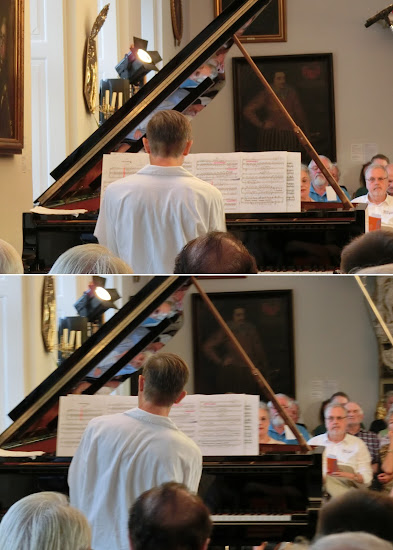 The Italian pianist Marco Rapetti presented an evening of Russian music, one interestingly characterised by a distinct absence of Russian nationalism. He has, for me, exorcised the notion that Cesar Cui (member of the Mighty Handful, and infamous critic of Rachmaninov’s First Symphony) was a bad composer. If anything, parts of his suite A Argenteau sounds more like Wagner (Parsifal and Tristan come to mind), and there’s even a Toy Soldiers’ March that seems to have escaped from The Nutcracker. Causerie, arguably the suite’s best-known piece reaches Rachmaninov-like heights of ecstacy.

Then we have the First Sonata of the tragically short-lived Alexei Stanchinsky (1888-1914, whose turbulent life was even briefer than Scriabin’s), which has nifty syncopations, saucy harmonies, moving lyricism, portentous moodiness and a jazzy presto finale to close. In Rapetti’s very capable hands, this is something I would like to hear again. Rather un-Russian in feel are are pieces by Arensky, Conus and the early-Chopin influenced Scriabin himself. Alexander Scriabin’s Canon is dry and academic but his early Sonata in E flat minor, which could be labelled Sonata No.0 (preceding his ten numbered sonatas), is quite something else.

This might just be Scriabin’s longest sonata. Its rambling and not fully-formed, filled with Chopinesque cliches but has enough of early Scriabinisms (think of his early sonatas and preludes) to merit some interest. Its full of ideas, ecstatic outbursts, impetuous and tempestuous pages, and awkward page-turns. Rapetti could have done with an alert page-turner (no shortage in Husum!) if anything to forestall untoward breaks, but he nonetheless survived. There were four encores, by Ornstein (To A Grecian Urn), Shchedrin (In Imitation of Albeniz), Scriabin (a prelude) and Borodin (Au Convent from Petite Suite), thus closing with gentle bell sounds. In short, a quintessentially Husum recital: very curious but totally enjoyable. 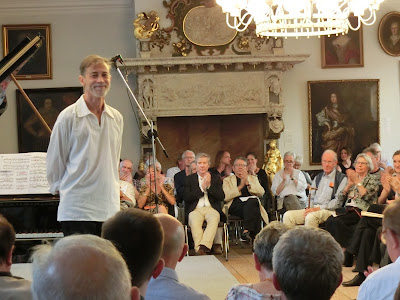 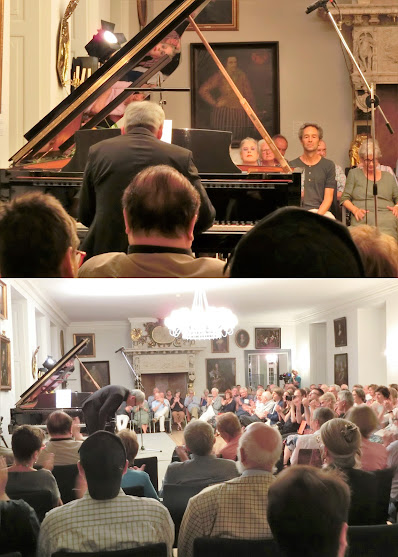 This had to be the most intellectual programme at this year’s festival, founded on Bach, counterpoint, the fugue and thematic transformation. If a pianist were paid by the volume of notes alone, German pianist Markus Becker would be more prosperous than Lang Lang. I don’t know which combo has more notes, Bach-Busoni or Bach-Reger, but I reckon its the latter. In B-R’s Prelude and Fugue in E flat major, the piano attempts to relive the organ’s sonority. Throw in some over-indulgent pedalling, it comes as plethoric morass of sound. There are plenty of missed notes but Becker gives his all in this unbridled account that needs no apology.

Viktor Ullmann’s Variations and Double Fugue on a Theme by Schoenberg is one tough and thorny cookie to crack. The former student of Schoenberg’s, murdered by Nazis at Auschwitz, used one of his master’s atonal Kleine Klavierstücke (Op.19) and creates a grosse klavierstück in its place. The one thing about atonal works is that when a tone row gets heard repeatedly (as in a set of variations or gets worked contrapuntally), the ear gradually adapts and it does not sound so fearsome after all.

Hindemith’s Third Sonata is one of my favourites (thanks to Glenn Gould), so droll and quirky are its themes that its hard to dislike. While Becker may not have the devastating and evil wit of the loony Canadian, his is still a solid account that deserves plaudits.

The piece de resistance had to be August Stradal’s transcription of Julius Reubke’s Sonata on the 94th Psalm, orginally an organ work. This masterpiece by the short-lived student of Liszt (Reubke was dead at 24) is the Liszt sonata on steroids, and should be heard more often. The only problem: who would bother to learn all these notes? Becker did, and more than delivered on its masses and expanses of sound with a passionate vehemence that was hard to ignore. Reubke was a blazing meteor who burnt himself out too soon. His encores made for delightful contrasts: the Bach-Reger Ich ruf’ zu dir and the witty finale from Haydn’s Sonata in E minor (Hob.XVI:34).