I HAVE NO CHRISTMAS TREE BUT... 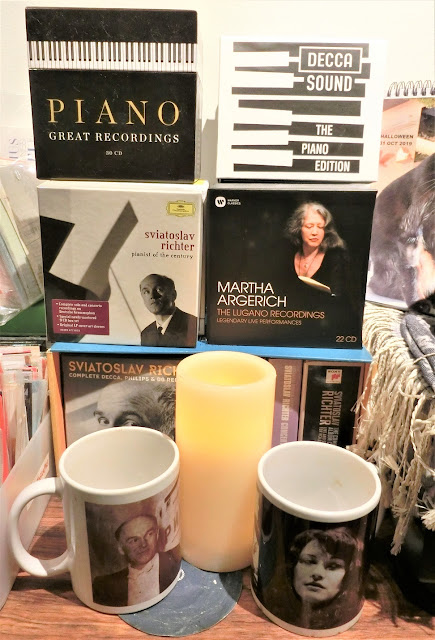 I DON’T HAVE A CHRISTMAS TREE BUT....

I don’t have a Christmas tree in my apartment but in the true spirit of the festive season, I have erected a shrine. This is an altar which no self-respecting pianophile should be without, one dedicated to the patron saints of the performing pianist.

They are none other than St Sviatoslav and St Martha, having recently been canonised by the Most Holy Pontiff of Piano Virtuosity, Pope Marc-André. Incidentally, Pope Marc-André is the first non-Italian Pope having come from Montreal, Canada. He succeeded a whole long line of Italian popes, who have included Pope Ferruccio Dante Michelangelo (died 1924), Pope Arturo Benedetti (died 1995) and Pope Maurizio (still alive but not in the best of health, or playing ability for that matter).

Anyway, back to the Saints. St Sviatoslav, originally from Ukraine, never came to Singapore. Having cancelled every single engagement to play at Victoria Concert Hall, he always preferred to perform in some barn in France before his ascension to the nether reaches.

St Martha, originally from Argentina, is a living saint. She made two appearances at Esplanade Concert Hall in June 2018, her only visit to the island republic to date. No one has filled the hall like she did since other living saint St Lang (originally of Shenyang, China) and only the likes of St Yuja (Beijing), St Evgeny (Russia), St Leif Ove (Norway) or St Mitsuko (Japan) could possibly displace the greatness and hotness of St Martha. At the moment, they are minor living saints in comparison to the almighty St Martha.

Finally, it should be said that the shrine to St Sviatoslav and St Martha looks just about perfect at night and in dim lighting, much like of the former’s barn recitals. So here it is in the illumination of a single glowing candle, for the Debussyan effect of Les soirs illumines par l’ardeur du charbon, or something to that effect.

So come on bended knee and worship. All hail...

By the way, HAVE A BLESSED CHRISTMAS & MAY THE NEXT YEAR 2021 BE A BETTER ONE. Frankly, it could not be any worse, except for maybe fans of Arsenal Football Club.