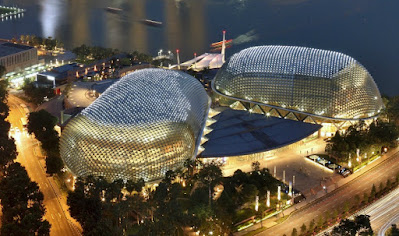 Concert life is slowly but surely coming back to life in Singapore. Earlier in January, there were two consecutive evenings of concerts at Victoria Concert Hall, featuring the likes of Singapore Lyric Opera and re:Sound’s chamber groups. The last weekend went one better with three varied concerts at the three iconic spaces of Esplanade Theatres On The Bay. While social distancing, face-masking and Trace-Togethering have become par for the course, a sense of normality has returned. So let us see what transpired. 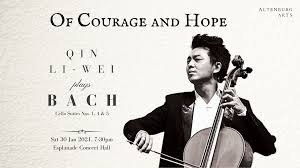 OF COURAGE AND HOPE

Make no mistake about it, Australian-Chinese cellist Qin Li-Wei, presently an Associate Professor at the Yong Siew Toh Conservatory, is the greatest cellist ever to make his home in Singapore. His various concerto performances and recitals, supplemented by superb recordings of wide-ranging repertoire on compact disc, attest to that notion. This one man solo show, with three of J.S.Bach’s unaccompanied Cello Suites, confirmed that as plain fact. 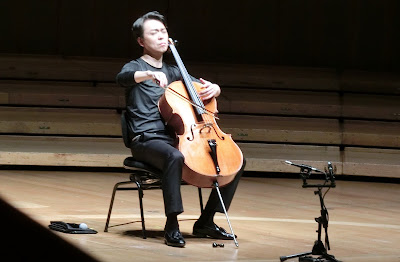 Quite unusually, he performed these in reverse published order, beginning with the ultra-serious and sombre Suite No.5 in C minor (BWV.1011), also the longest of the three. Straight off, one is struck by the intent and intensity of Qin’s musings. His tone is voluminous, filling the capacious hall with an immediacy of clarity and purity. Never mistake this with loudness, and nothing he does is brash or vulgar. With his kind of playing, the music does not shout into the face but speaks directly to the heart. This continued all through the suite’s six movement schema (Prelude – Allemande – Courante – Sarabande - Dance Doubles - Gigue), alternating fast and slow dance numbers, which was further repeated in the other suites.

Even if Bach originally meant these to be übung (exercises) for his cello or gamba friends, the movements transcended mere technical execution to attain spiritual sublimity in Qin’s  interpretation. As he continued without intermission into Suites No.4 in E flat major (BWV.1010) and No.1 in G major (BWV.1007, also the most familiar of the six), the works get progressively shorter and definitely cheerier. This was, without a doubt, a journey from grim darkness to shining light, with each long-breathed Sarabande in the three suites being focal points for reflection and contemplation. 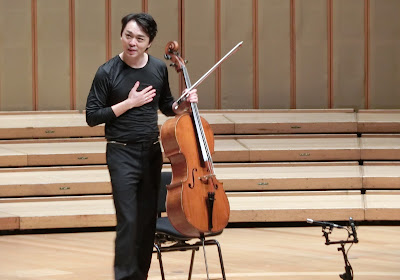 This was fittingly allegorical to the current Covid pandemic, a gradual but optimistic trudge towards the light at the end of the tunnel. There were surprisingly many children in the hall, and judging by their stillness and relative silence, some of the messages must have gotten through. There was a sole encore, an unaccompanied and truncated version of Rachmaninov’s Vocalise (Op.34 No.14). Needless to say, Qin’s tone and lyricism was simply ravishing.

It’s been almost two years since TO Ensemble last performed a public concert. In the meantime, jazz pianist Tze Toh and his merry band produced a compact disc recording, besides preparing for this concert which saw a smaller and more compact group of players. Missing in action was saxophonist Teo Boon Chye but returning after a hiatus of ten years is erhu exponent Dai Da. With Carnatic violinist Lazar T.Sebastine and Toh being the constants, this was to a more string-based sound to the programme titled The Skies Beyond.

The premise is a multi-millennia history of mankind, from the violence of primal tribes to modern inventions of man which reach for the sky, with references made to Leonardo da Vinci, Amelia Earhart and Stephen Hawking.

One should probably best forget all the titles of the multi-movement concert, for each piece does not conform to any classical form. These are probably best described as fantasies with programmatic inspirations, where initial ideas inputed on piano, electronic keyboard or pre-recorded tape, are later improvised upon by the musicians. There were only few moments when all three performed together, and the play of counterpoint would have been nice but these opportunities were not fully exploited. 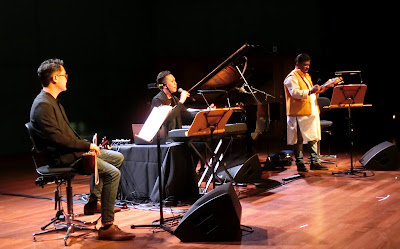 Heavy bass chords and clusters occupied the episode entitled War, where the influence of Bartok or Messiaen may be cited. The mood shifted from darkness toward light (an unconscious echo of the previous evening’s Bach cello suites) and there was even a waltz movement for erhu and piano which afforded some sentimentality and nostalgia. With Lazar’s inimitably nonchalant fiddling stealing the show (as he invariably does), eighty pleasurable minutes passed like a flash. Was this easy listening, jazz, classical, crossover, World Music, or a heady conflation of all these? As before, TO Ensemble defies any form of pigeon-holing or classification, yet sounds different at every outing. Tze and Co roll on, and we the listeners are all the richer for it. 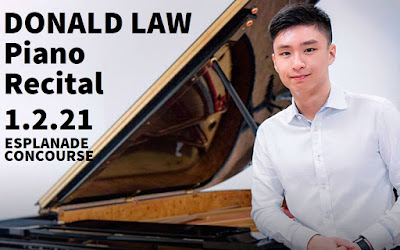 Young local pianist Donald Law performed two short recitals at the Esplanade Concourse, featuring favourites of his repertoire. Beginning with Mozart’s Rondo in D major (K.485), he revelled in its light-heartedness while providing adequate contrasts within the shifts between major and minor keys. In Debussy’s La plus que lente, one of his pet party pieces, he exercised liberties in rubato. Turning its sentimental slow waltz into a series of episodes, there was a sense of dislocation from the Belle Époque, instead looking ahead to the cataclysm that is Ravel’s La Valse, its final fruition. Hopefully he’ll play that someday. 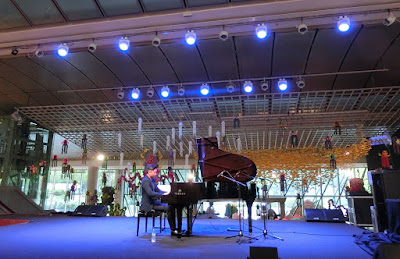 Moving into serious territory was Janacek’s Sonata I.X.1905 “From The Street”, two movements that revealed a more sober side to the artist. He explained the premise and underlying tragedy of the work in a short preamble, and then showed he meant every word of it. Its narrative arc from expectation (the first movement is titled Premonition) to ultimate violence (Death) and its denouement was well brought out. The catharsis afforded by the sonata might have affected his final selection, the finale of Chopin’s Third Sonata in B minor (Op.58). He started confidently but almost got derailed near the rondo theme’s final statement. Nerves are most probably the reason, but he valiantly weathered the storm till its heroic close. 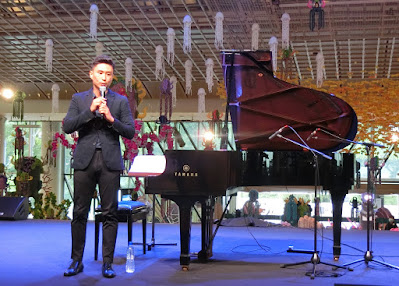 So that was three concerts in three days as Singapore emerges from the Covid circuit breaker. It’s a start and there are more events, both live and streamed, to come. That is something worth being patient for.