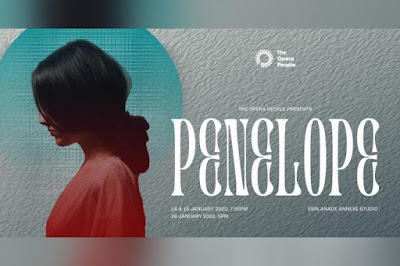 This review was published in The Straits Times on 19 January 2022 with the title "Girl power in pared down opera".

When one thinks of opera, visions of heroic singers, humongous casts, epic sets and lavish costumes come to mind. At the opposite end of the spectrum is chamber opera, with production pared down to the minimum, supported by modest budgets and keen minds striving to do something different. Ambition, without compromising on quality, has been the vision of groups like New Opera Singapore, L’Arietta and The Opera People.

Plaudits go to The Opera People for even attempting to stage American composer-conductor Andre Previn’s final work, the opera Penelope based on Homer’s Odyssey, left unfinished when he died in 2019. With libretto in English by Tom Stoppard, the project was realised by Previn’s copyist David Fetherolf and premiered later in the same year with soprano Renee Fleming in the title role.

The Opera People’s production went one step further by merging the opera with English composer Benjamin Britten’s 1939 song cycle Les Illuminations, with words by Arthur Rimbaud sung in French. This odd mix might not have worked if not for the skilful curation of sung and spoken texts undertaken by the production team with stage director Edith Podesta.

The musical idiom of both works is tonal, and especially lyrical in the case of Britten, which made for quite seamless transitions between the set-pieces. Previn’s instrumentation was scored for string quartet and piano, while Britten’s was wholly for strings. All these were comfortably accommodated by the Wayfarer Sinfonietta conducted by Lien Boon Hua.

Its story was simple: the trial of Penelope’s unwavering faith in her husband Odysseus twenty-year absence while fighting the Trojan War and his dangerous journey back. Penelope was personified by three women, sopranos Teng Xiang Ting and Felicia Teo Kaixin, and actor-narrator Koh Wan Ching, representing her heart, body and mind respectively.

There was however a clear delineation of roles, with Teng singing only Previn, and Teo singing just Britten. Fanfare, the first of Britten’s ten songs, opened the show boldly with, “J’ai seul la clef de cette parade sauvage” or “I alone have the key to this savage parade”.

This proclamation would reappear two further times, being a recurring theme but sung differently on each occasion. With this, Penelope established her self-determination and steely resolve. Although liberties were taken with reordering the sequence of Britten’s songs to suit the narrative, this gambit did not turn out to be too jarring.

Through the action and music, one became privy to Penelope’s uncertainties, fears and anxieties. When will he return, if ever? If not, should I move on? All this in the face of mounting pressure, such as the plaints of a cynical son and hundred suitors. These were laid bare, symbolised by the women shedding their forbidding trench-coats to reveal snug maroon gowns.

Penelope stays true to the end, as the old man who puts her to the test is none other than Odysseus himself. This affirmation of female empowerment shone through in this well conceived and excellently executed 70 minutes of musical theatre.