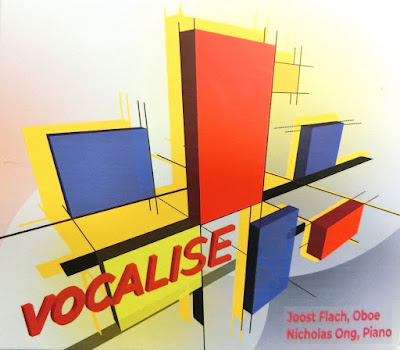 A vocalise is a song without words, usually rendered with a flowing mellifluousness best examplified in the famous Rachmaninov number (Op.34 No.14). However, that song is not included in this very interesting collection of 20th century vocalises performed by Dutch oboist Joost Flach and Malaysian pianist Nicholas Ong, both esteemed faculty members of the Nanyang Academy of Fine Arts (Singapore).

Opening the anthology is the sole Singaporean contribution, Zechariah Goh Toh Chai’s Romance (1991). Just one of two works specifically written for oboe and piano, its simplicity is matched by its melody. There is sadness and nostalgia on show, the plaintive quality of the oboe fully exploited.

The best known work of the collection is Prokofiev’s Five Melodies Op.35 (1920), originally written for high voice, but now a favourite with violinists. These sound perfectly idiomatic for oboe, a svelte and creamy tone brought out by Flach being every bit as beguiling. Its counterpart is the Little Suite (Vocalises) from 1952 by Dutchman Marius Flothuis (1914-2001), five varied movements (originally for soprano) which display a myriad of moods from meditative pensiveness to jollity. Unsurprisingly, versions for clarinet, soprano saxophone and trumpet also exist.

The vocalises by Olivier Messiaen and Aaron Copland come from their earlier years. Messiaen’s Vocalise-Étude (1935), originally for high voice and from the same period as his better-known Theme et Variations (for violin and piano), is simply haunting for its exoticism, as if emanating from somewhere in the Far East.  Aaron Copland’s Vocalise (1928/1978), written as a commission from the Paris Conservatory (several years after his studies with Nadia Boulanger), sounds far more academic, dominated by a series of scale passages. Hardly vintage Copland. Albert Roussel’s Aria (1930), at just two minutes long, makes for a pleasant pastoral diversion.

The style of Dutch composer Louis Andriessen (1939-2021) evolved through the years, espousing neoclassicism, serialism and minimalism amongst others. His very early Sonatine for oboe and piano (1955), in three short movements, is unpublished and a true rarity. This might even be its first recording. According to Flach’s programme notes, the original manuscript had been lost (confirmed by Andriessen himself) and this performance was from a facsimile copy. In traditional fast-slow-fast form, it is very eclectic, and when heard in parts, influences by the likes of Stravinsky, Hindemith, Milhaud, Poulenc and Messiaen may be discerned. Andriessen’s deep admiration of compatriot artist Piet Mondrian is also reflected in the album’s cover design.

Joost Flach represents the hallowed Dutch school of oboe playing, which emphasises clarity of articulation, silvery singing tone and a mercurial violin-like sheen. His playing is simply ravishing, sensitively partnered by pianist Nicholas Ong who does not get relegated to the background. The recorded sound is lovely, and despite its short playing time of just over 40 minutes, there is no shortage of good music and great playing.