Where would we be without Red Dot Baroque and SingBaroque? The music scene in Singapore has been enriched beyond compare after these two groups began their joint evangelism of baroque music from 2018-19. Those satisfied with just knowing Bach, Handel, Vivaldi and the Pachelbel Canon would have had their ears and eyes opened, and horizons widened in their concerts, the latest collaboration being an introduction to the musical world of Elisabeth Jacquet de la Guerre. 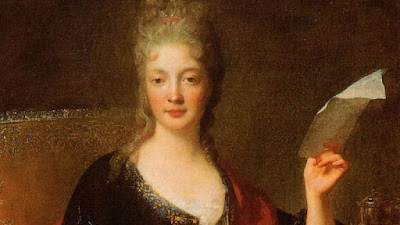 Who? Elisabeth Jacquet de la Guerre (1665-1732) was born near Paris, a child prodigy who became a professional musician in the court of King Louis XIV of France, better known as the “Sun King”. In 1694, her Cephale et Procris was the first ever opera written by a woman composer in France. Her music is still little known to the general public, and practically never heard in Singapore, and this concert of premieres served as a totally enticing taster.

As if to prime the audience for further discoveries, the works got progressively longer, beginning with four movements from de la Guerre’s Suite in A minor for harpsichord. These included a Prelude, Allemande and Courante, before closing with a Chaconne. Gerald Lim played with an improvisatory freedom of tempo and without much ornamentation. For those familiar with antique dance movements, these looked forward to those French Suites by J.S.Bach. Yes, Elisabeth was Johann Sebastian’s senior and her keyboard works predated those of his. 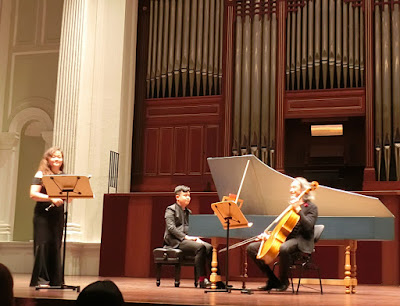 Now things were getting even more interesting with flautist Cheryl Lim as the lead in Flute Sonata No.2 in D minor. Although Italy provided the model for the sonata, its four movements were not in the traditional slow-fast-slow-fast sonata da chiesa (church sonata) form. Instead it was fast-slow-fast-fast, which put even more pressure on the technique and endurance of the soloist. The third movement was a fast gigue, followed by an even faster dance to close. Cheryl and her pleasingly mellow flute tone were equal to all the challenges. 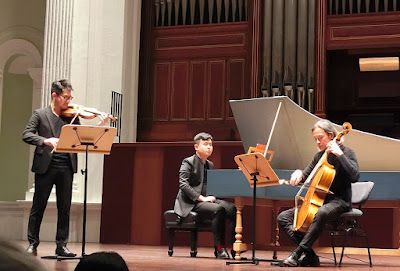 More extended was the Violin Sonata No.1 in D minor, in multiple movements alternating between slow and fast. There was an operatic quality to the proceedings with Alan Choo as protagonist, the slow bits acting as recitatives preceding the faster virtuosic main movements. Even each of these were different, often involving Leslie Tan’s cello as a partnering and sparring voice. The play of counterpoint although not of Bachian complexity was still lively and provided many passionate moments. 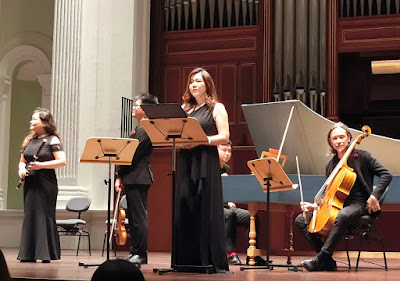 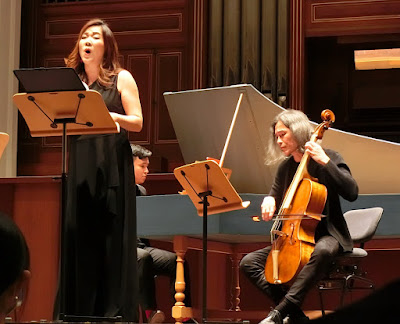 All this built up to the tour de force delivered by soprano Teng Xiang Ting in the cantata Samson, about the biblical judge of superhuman strength. The French texts make no mention of the temptress Dalila but a Samson weakened and captive slave of l’Amour, his humiliation but final resolve to destroy the Philistine enemies. Like in the sonata, Recitatif followed Air, with Xiang Ting’s vivid narrative being centrestage. Her idiomatic French (as attested by Francophones) was matched with a voice of expressive power and ravishing beauty. These would reach a climax in the aria Tremblez, fiers Tyrans (Fear, Proud Tyrants) where Samson forewarns the mocking foe, in a Handelian rage. 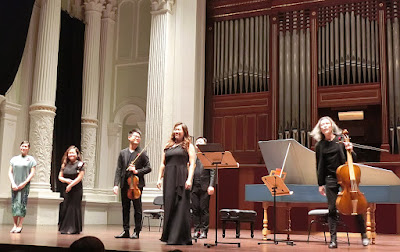 The loud and prolonged accolades which greeted the band was reciprocated with an impromptu encore, a reprise of Tremblez, fiers Tyrans, resounding with even more fervour this time. The grateful audience had also been forewarned, Elisabeth de la Guerre’s time will come. 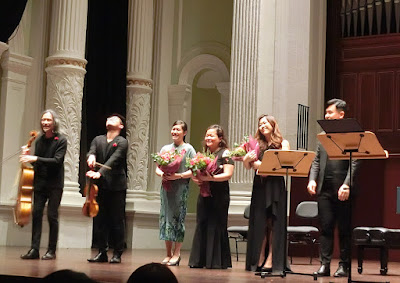